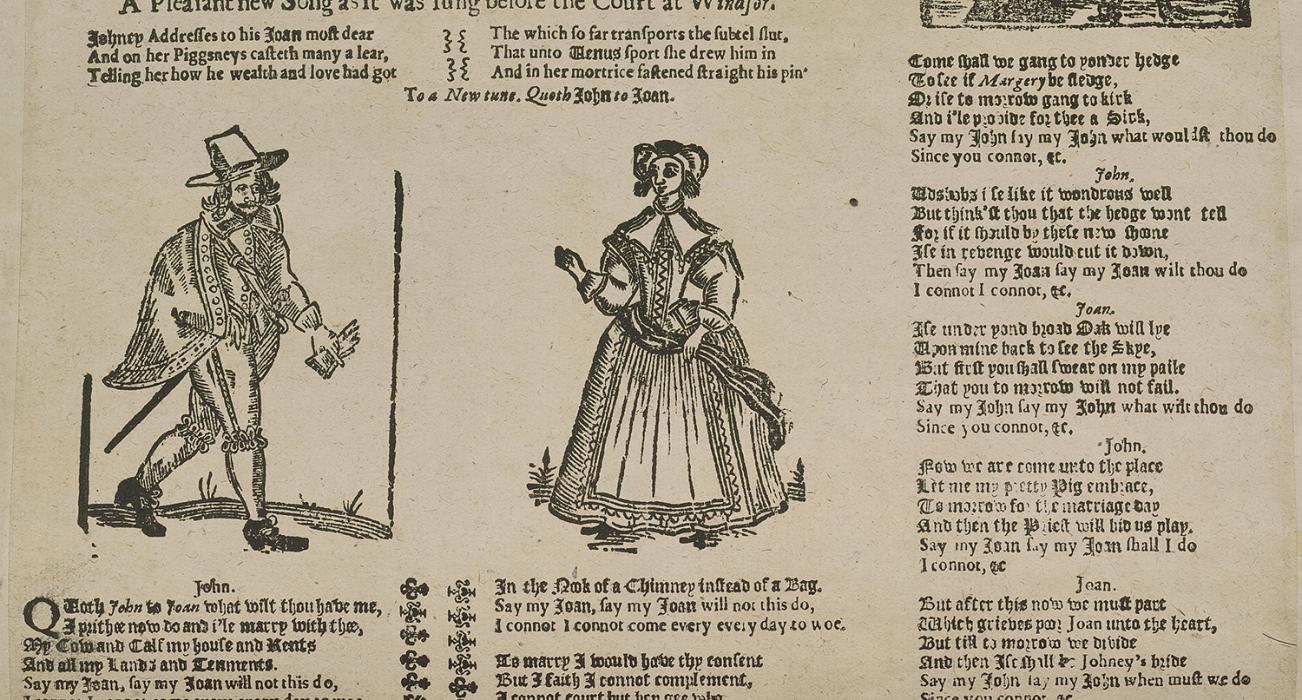 The Pepys Library is home to one of the largest collections of broadside ballads in the world.

Printed on a large, single sheet of paper (thus ‘broadside’), these cheap, everyday publications were the popular songs of their day, reaching the height of their popularity in the 1660s. Some 10,000 broadside ballads have survived into the present day, with Pepys’ collection consisting of some 1,800 items.

Pepys began collecting in this field by acquiring the ballad collection of the jurist and scholar John Selden, which forms the basis of the first ballads volume. Pepys went on to collect hundreds more examples, enough to fill an additional four volumes. He grouped them into categories of his choosing, such as ‘Love pleasant’, ‘Love Unfortunate’, ‘History, True and Fabulous’ and ’State and Times’.

The collection feeds into Pepys’s love of music, but also his enthusiasm for collecting everyday, popular publications, evidenced by his volumes of chapbooks and curious ephemeral items in his print albums. Broadside ballads, and other broadside publications such as news sheets, were usually at this time thrown away or recycled, for example to line cake tins, or even used as toilet paper! Consequently, the ballads are now very rare, with only a small group of significant collections held in libraries around the world.

Research into these ballads can comprise of many aspects, such as how they were printed, illustrated and disseminated, textual analysis of the ballad lyrics, interpreting their musical performance, and what they tell us about the social and political climate at their time of publication. This exhibition will give a flavour of these different aspects of research through a selection of the ballads, alongside some musical examples. The whole of the Pepys’s Ballad collection has been digitised and is available on the ‘English Broadside Ballad Archive’ hosted by the University of California Santa Barbara.

A shortened version of the ballad in four stanzas, as well as the melody for the ballad, appears in one of the key sources of English popular song of the late 17th and early 18th century called ‘Wit and Mirth: Or Pills to Purge Melancholy’ by Thomas D’Urfey in 1719 (though ‘Wit and Mirth’ was originally published in various earlier editions by Henry Playford). It is said that D’Urfey sang The North Country Lovers for Charles II, as referred to underneath the title of the ballad. However, the story and the melody have earlier roots in the form of an Elizabethan romance called Joan and John, and a consort song called ‘Joan, quoth John, when will it be’ by Richard Nicholson (1563-1639).

This ballad may seem at first to be an innocent song about the bond with ‘man’s best friend’; however one needs to substitute the ‘dog’ for male genitalia in order to elucidate the full meaning of this text. Many ballads, like its contemporary the catch (comic songs sung ‘in the round’) are extremely bawdy in nature. For contemporary listeners to the ballad, an allusion to the ballad’s bawdiness would have been obvious from its outset: its tune, called Bobbing Joan, was widely known to have sexual connotations.

Christopher Marsh provides an explanation for this format of ballad in the book ‘The uses of Script and Print, 1300-1700’:

‘It seems possible that the ballad-writer, in this and comparable cases, aimed to deceive the official licenser [for its printing] by deliberately excluding the obvious smut from the title and initial verses, burying it instead in the melody and the body of the text, where it could later be rediscovered by well-informed listeners.’

Similar to the ballad above, seemingly innocent remarks are often bawdy upon closer examination, and Diddle Diddle celebrates sex and drinking. The line ‘my dog and I’ (see above) also makes an appearance.

Retaining its simple melody but switching to more innocent words, Diddle Diddle becomes known over time as a nursery rhyme called Lavender’s Blue. Benjamin Britten uses the ballad in its nursery rhyme form in his opera The Turn of the Screw, based on the novella by Henry James, and it has been referenced several times in pop culture - David Bowie sang Lavender’s Blue as part of his Serious Moonlight live tour in 1983.

The woodcut images used in this ballad have been used in several others – a common tactic by printers to produce these cheap publications. For example, the image of the couple on the left hand side appears in the ballad The country maidens lamentation for the loss of her taylor (PL Ballads III.343) and the individual male face on the right turns up in A tragical story of Lord Thomas and fair Ellinor (PL Ballads III.316).

While many ballads were based on everyday scenarios with plenty of bawd, this example with prominent woodcut illustrations is based on the verse romance Sir Eglamour of Artois from the mid 14th century.

This Ballad upon Tobacco, where smoking is presented as a metaphor for life, is one of five handwritten examples of ballads contained within Pepys’s volumes. Most of the handwritten examples were likely included to increase the historical range of the collection, however, the Ballad upon Tobacco is said by Richard Luckett, former Pepys Librarian, to be ‘a single survivor from what might be regarded as the casual period of Pepys’s ballad collecting’.

The ballad text derives from earlier sources. The Pepys Ballad upon Tobacco is certainly a variant of a poem A religious use of taking tobacco attributed to Robert Wisdome (d.1568), in a manuscript from the library of Trinity College Dublin (IE TCD MS 877, folios 40v-41r). The Wisdome poem begins:

The Indian weede withered quite

Shewes thy decay all flesh is hay

This earlier origin of the poem broadly coincides with the introduction of tobacco into Europe, and was one of the chief commodities to intensify the European colonisation of the Americas. The Wisdome poem could well be the earliest known reference in English to tobacco.

There are no extant broadside ballads using the Ballad upon Tobacco as a text. The Pepys Ballad upon Tobacco has almost certainly been copied out from Pepys’s own volume of Henry Playford’s ‘Wit and Mirth’ dating from 1699. Save for two verses being copied in the wrong order, the text exactly matches this printed source of the poem.

To conclude the exhibition, we display this unique printed broadside, atypical of Pepys’s ballad collection. The woodcut illustration has been identified as the work of Hans Holbein the Younger, the great renaissance artist, and is undoubtedly of superior quality compared to the other woodcuts in the ballad collection.

The subject of the broadside, with its fine woodcut and twelve stanzas of English verse, is an account of Martin Luther challenging Pope Leo X, flanked respectively by a threshing peasant and by Albrecht, Cardinal Archbishop of Mainz. The author of the text has been identified as Miles Coverdale, the 15th century ecclesiastical reformer who studied at Cambridge but was exiled during the rule of Mary I.

David Paisey and Giulia Bartrum, in their journal article ‘Hans Holbein and Miles Coverdale: A New Woodcut’ state that ‘Martin Luther...is portrayed as a young and athletic figure – a startling attribute otherwise unknown to Lutheran iconography – whose pen is his weapon. He ostentatiously brandishes it at the Pope and it is glossed in the text as the Word of God.’