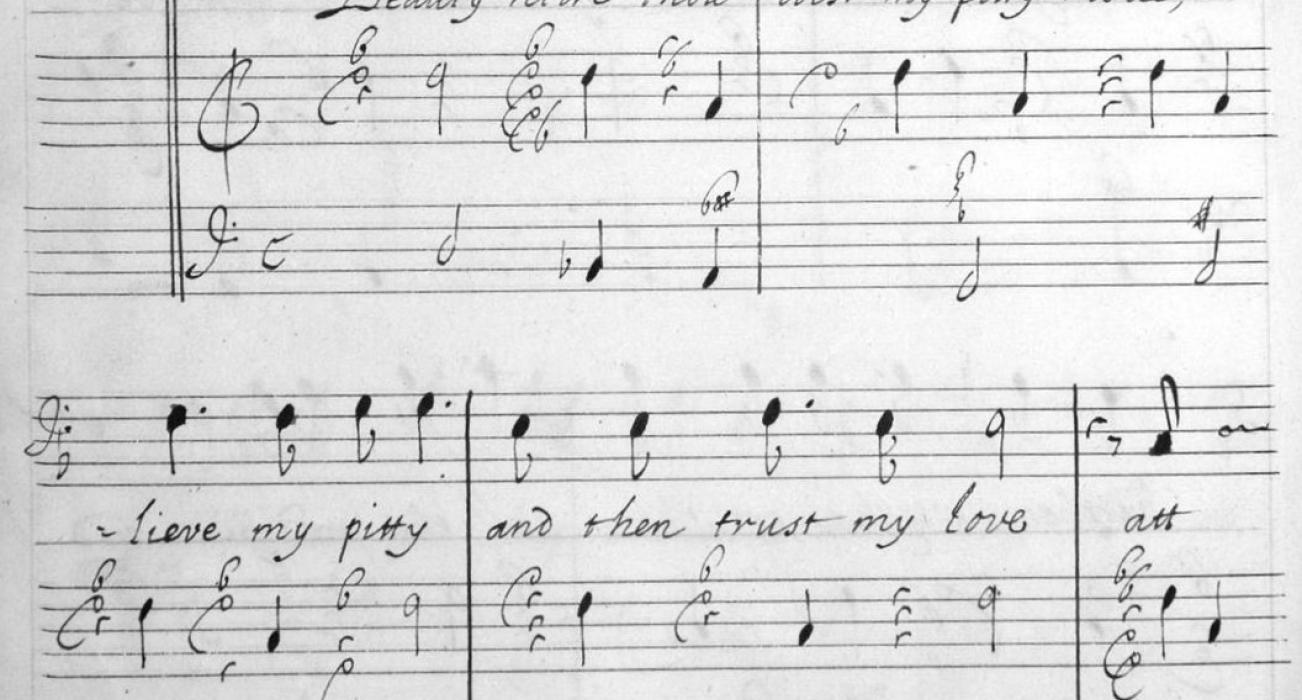 Pepys was an avid enthusiast for all aspects of music: he tried his hand at several musical instruments, was a competent singer and dabbled in composition.

There are several entries in his diary referring to music-making at home with friends, as well as to secular music performed as part of theatrical performances and sacred music in the church.

Pepys’s life spanned an interesting period of the development of music in England. The instruments of the renaissance such as the viol, lute and theorbo, although still being played, were in their descendance in England. However, the guitar and the modern string family (such as the violin and cello) were gaining popularity. Pepys was a contemporary and acquaintance of Henry Purcell, considered one of the greatest English composers: it wasn’t until some 200 years later that any other English composer matched his popularity.

In his late thirties Pepys employed a composer and guitar teacher, Cesare Morelli, and over time incorporated several contemporary music manuscripts and printed works into his library. John Stevens notes in the introduction to the catalogue of music in the Pepys Library that the collection can be considered to fall into three categories: music for use, music and musical writings for study, and music of antiquarian and bibliographical interest (such as medieval music manuscripts). This virtual exhibition includes items from the library across these three categories and also an intriguing music-related object belonging to Pepys. 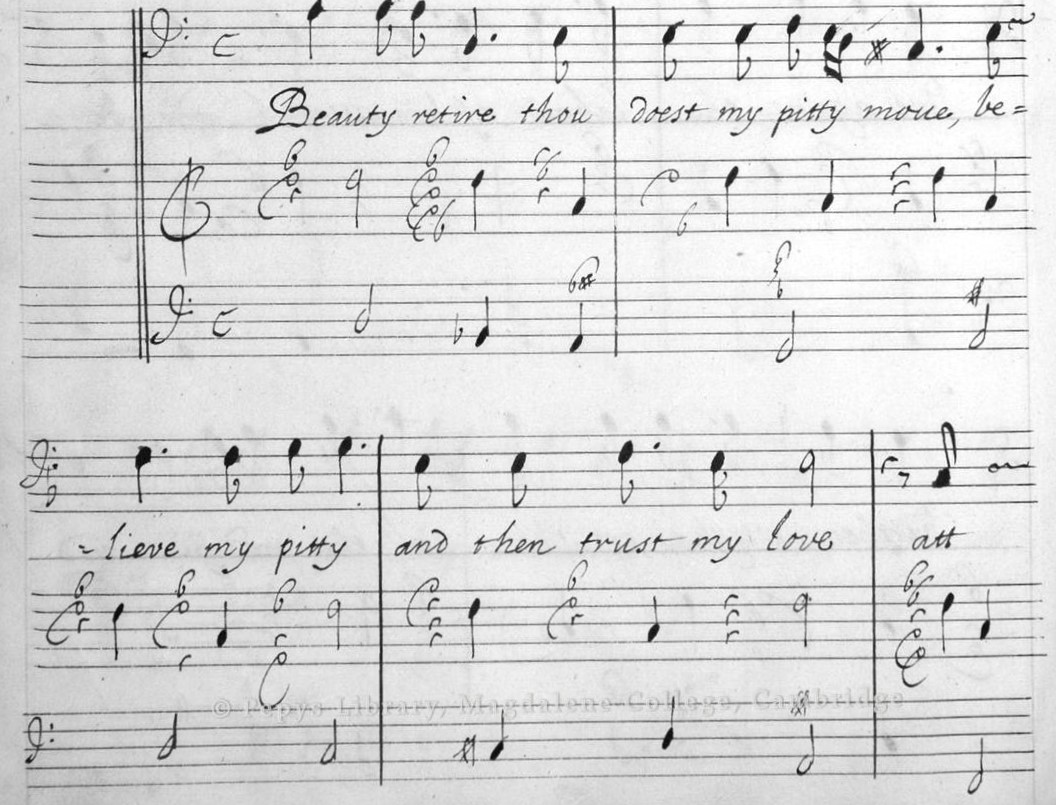 The two most well known attempts at composition by Pepys are songs entitled ‘It is decreed’, and ‘Beauty Retire’, set to words from Ben Jonson’s ‘Catiline’ and William Davenant’s ‘Siege of Rhodes’ respectively. Both of the songs are mentioned several times in Pepys’s diary and handwritten copies of the compositions feature amongst the music manuscripts in the Pepys Library.

Pepys was evidently most proud of ‘Beauty Retire’, for he holds a copy of the song in his most famous portrait by John Hayls, now in the National Portrait Gallery. A copy of the portrait hangs in the Pepys  Library.

As the diary attests, in December 1665 Pepys sang ‘Beauty Retire’ to his friend Thomas Hill, a merchant and musician. In January 1666, the actress and singer Catherine Coleman performed the song in front of a small group at Pepys’s lodgings, including her husband Edward Coleman, who was also a singer, and Nicholas Lanier, Master of the King’s Music under Charles I:

‘And good music we had, and among other things, Mrs Coleman sang my words I set of Beauty retire, and I think it is a good song and they praise it mightily.’

The following month, Pepys taught Beauty Retire to Elizabeth Knepp, a prominent actress and singer of the Restoration period. Pepys alludes to Knepp singing the song ‘abroad’ which seems to suggest she included the song as part of her repertoire for singing at parties outside London. 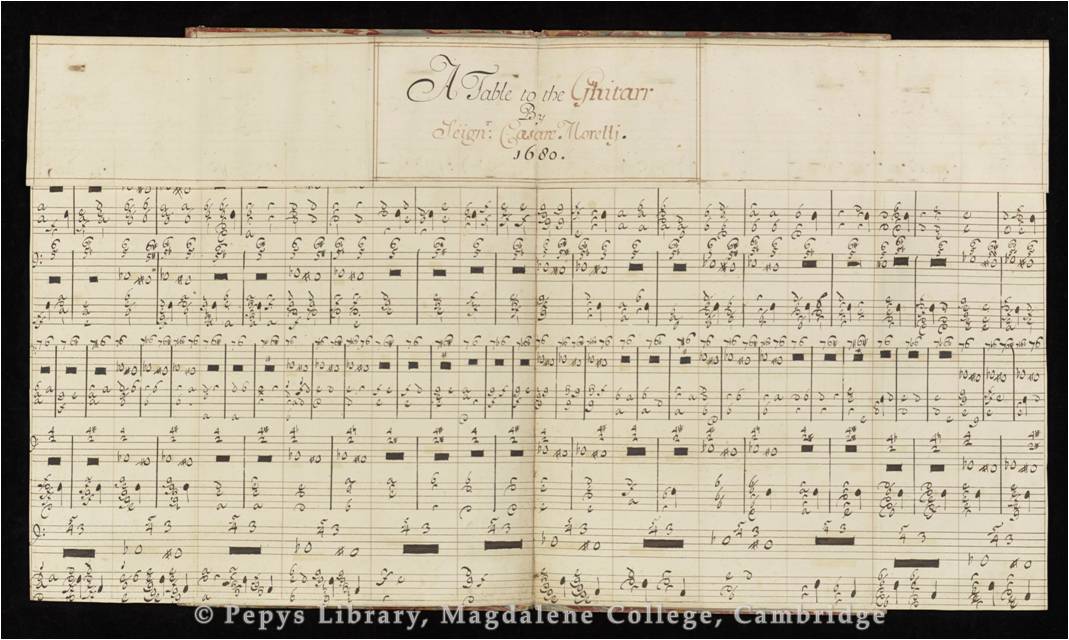 From the early 1670s, Pepys employed a composer and guitar teacher, Cesare Morelli. Although Pepys at first derided the instrument, he eventually succumbed to learning to play, a fashion popularised by Charles II and his court.  In fact, the first mention of the guitar in Pepys’s diary comes when he is entrusted to look after the King’s guitar upon his return from exile in 1660. Charles II employed a star player of the instrument, Francisco Corbetta, for some twenty years.

This table from 1680 was penned by Cesare Morelli and acted as a reference guide to guitar chords for Pepys. Alongside his teaching duties, Morelli arranged simplified versions of popular arias by composers such as Carissimi, Draghi and Lully – as well penning his own compositions - for Pepys’s level of competence and vocal range.

Morelli, as a Roman Catholic, was at risk in a time where Catholics in England were persecuted. During the ‘Popish Plot’, Catholics were not allowed within a thirty miles of London. Pepys sent Morelli to Brentwood in Essex, yet continued to pay him a retainer and, at quite some personal risk,  communicated with him by letter. 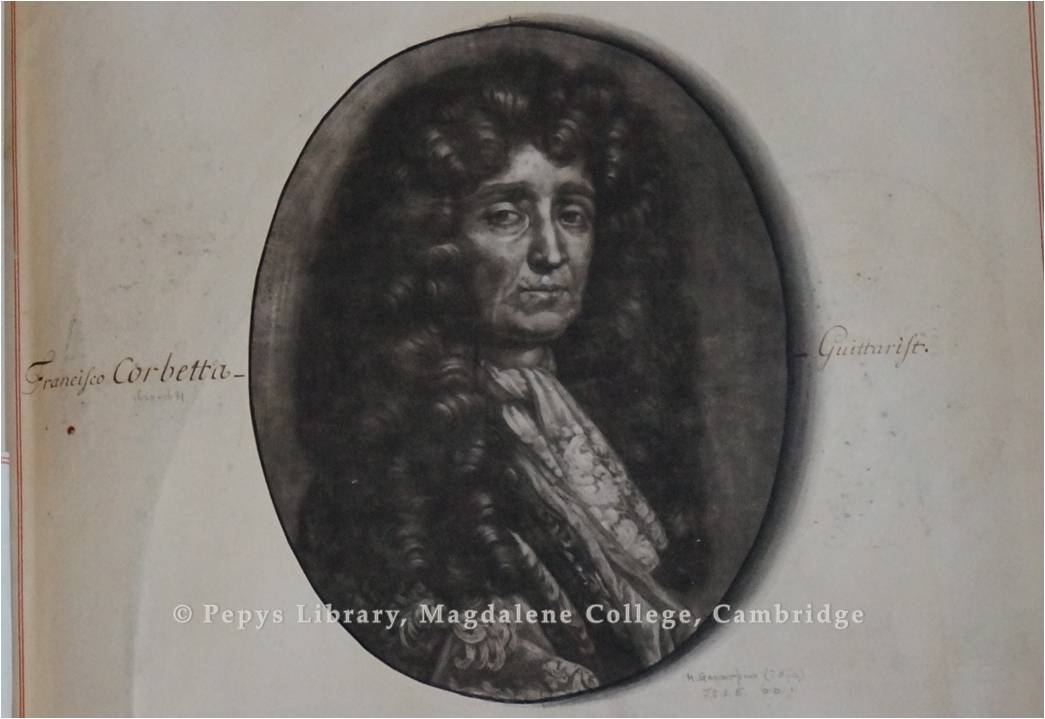 This is a mezzotint portrait of Francisco Corbetta, the guitarist employed by Charles II for some twenty years. Corbetta (c, 1615-1681) was from Pavia, Italy and during the course of his life composed and published several collections of music for the guitar. Professor Christopher Page in his book ‘The Guitar in Stuart England’ asserts that ‘The finest guitar playing of the 1660s and 70s in Western Europe was therefore to be heard in London, not Milan or Madrid, and only reached Paris in those years when Corbetta was on loan from Whitehall.’ Corbetta was also a useful person to have at court for other reasons: he could easily travel between countries due to his reputation as a top musician, and could therefore perform a diplomatic role for Charles II, especially in Anglo-French relations.

Corbetta is to be found in Pepys’s ‘Poets, &c’ section of his portrait collection. Other musicians and composers depicted under this category include Henry Purcell, John Blow, Nicholas Lanier and Giovanni Battista Lully.

Although in his later years, Pepys had many compositions set for guitar, it was not always his favorite instrument. Pepys gives an account of his first meeting with Corbetta in his Diary: 5 aug 1667 ‘After done with the Duke of York, and coming out through his dressing-room, I there spied Signor Francisco tuning his gittar, and Monsieur de Puy with him, who did make him play to me, which he did most admirably - so well as I was mightily troubled that all that pains should have been taken upon so bad an instrument.’

Further information and musical examples can be found in this lecture entitled ‘Samuel Pepys the Guitarist’ by Professor Christopher Page, author of ‘The Guitar in Stuart England’. 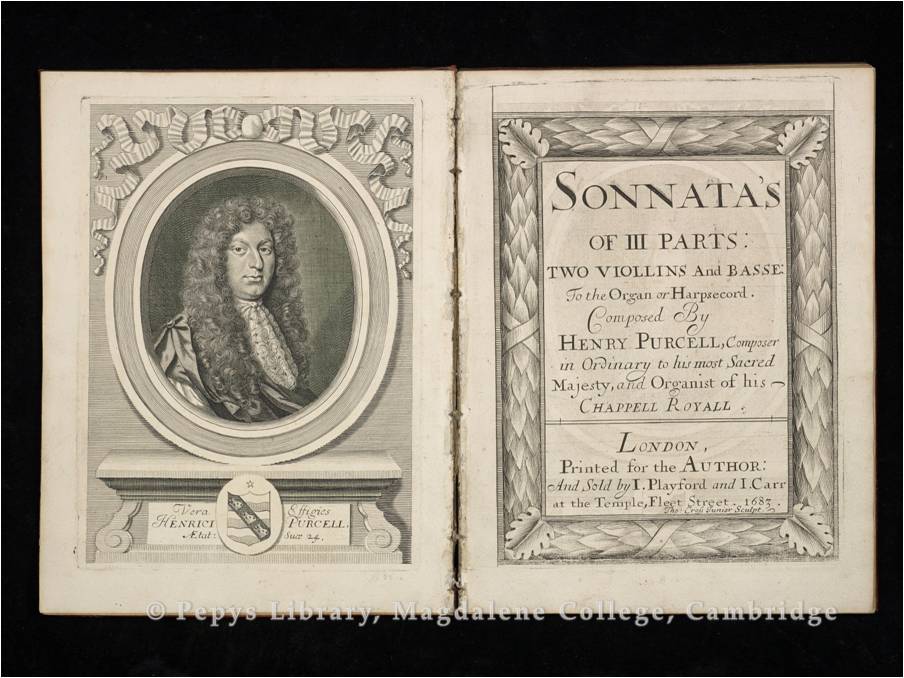 The sonatas are scored for four instruments, despite their title: two violins, bass viol, and organ or harpsichord. The combination of the modern violins with the bass viol certainly alludes to the rise of the modern string family and the decline of the viol family of instruments. The bass viol, which was versatile as a solo and accompaniment instrument, hung on for a while longer compared to the smaller viols, as this group of sonatas show.

According to the preface of this publication, Purcell ‘faithfully endeavour'd a just imitation of the most fam'd Italian Masters; principally, to bring the seriousness and gravity of that sort of musick into vogue, and reputation among our country-men’. He took his cue from the older generation of Italian composers such as Legrenzi, Colista and Vitali rather than those who developed the style further such as Corelli and Bassani. The music also used Italian directions on how the music should be played, such as Adagio and Largo. This is now standard practice but was in its early stages of the sonatas’ publication: ‘It remains only that the English practitioner be enform’d, that he will find a few terms of Art perhaps unusual to him’.

It is likely that these particular volumes were a dedication copy to Charles II, due to their exceptional quality of binding. 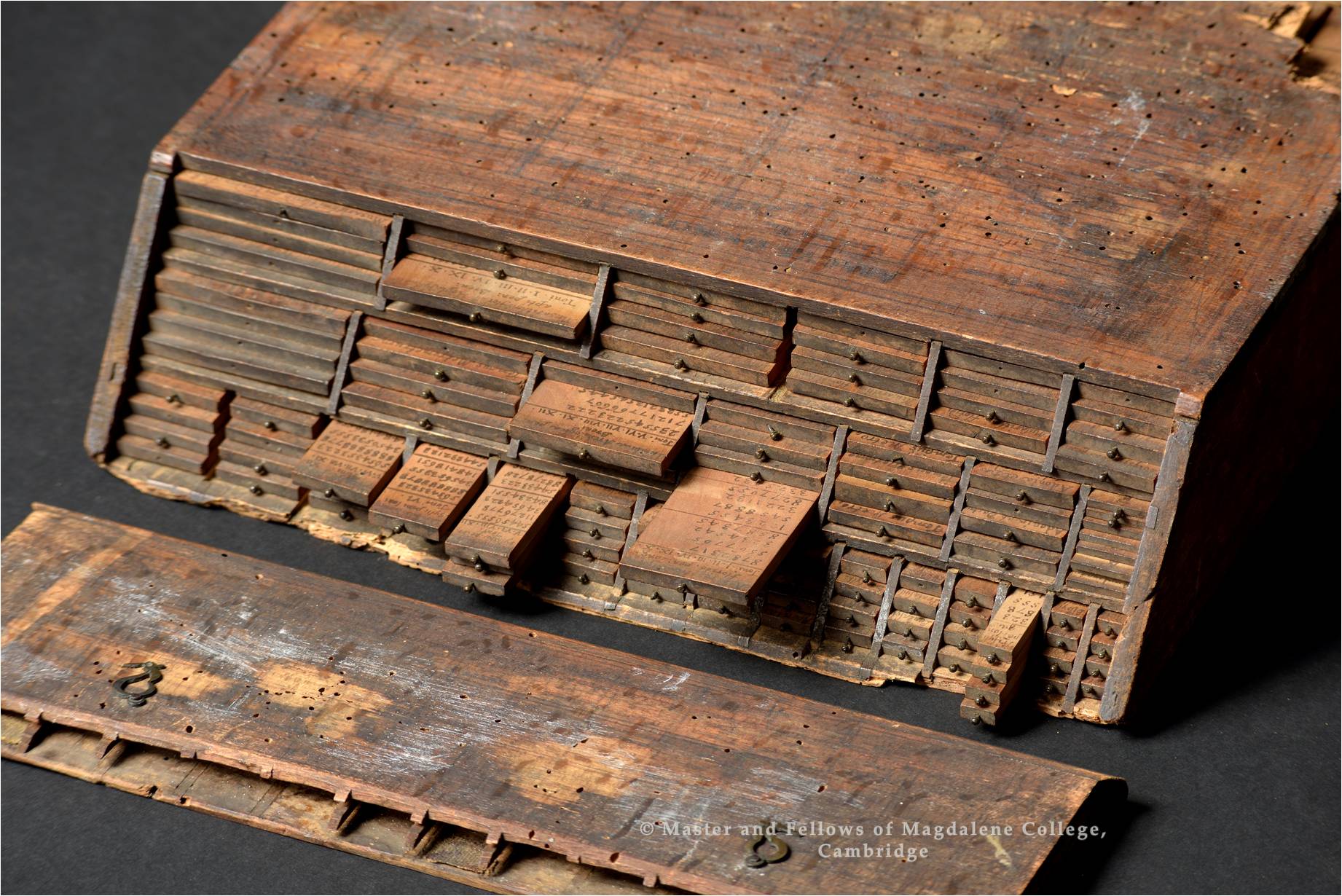 This unusual and extremely fragile object is one of the very few items at Magdalene College which previously belonged to Pepys, but was not part of his library. It is one of a handful of extant examples of its type in the world.

The Arca Musarithmica was invented by a Jesuit scholar called Athanasius Kircher (1602-1680) who has been compared to Leonardo da Vinci due to his reputation as a polymath. Kircher wrote some forty books on a wide range of disciplines, including a two volume work of musicology from 1650 entitled ‘Musurgia Universalis’ in which the Arca Musarithmica appears. Pepys describes purchasing his copy of this book in his diary entry for the 22nd February 1668: ‘Up, and by coach through Ducke Lane, and there did buy Kircher’s Musurgia, cost me 35s., a book I am mighty glad of, expecting to find great satisfaction in it.’

How does the the Arca Musarithmica work? By using the combinations of numbers to convert into musical notes indicated on small wooden plaques or ‘tariffa’, a person with any musical ability or none would be able to compose four-part music – in theory at least!  Although little is known about contemporary ownership and use of the Arca Musarithmica, we do know that the book in which it is described, the ‘Musurgia Universalis’ was highly influential and was a source for composers such as Bach and Beethoven. The Bibliothèque Nationale has digitised both Volume one and Volume two of the ‘Musurgia Universalis’ and the engraving depicting the Arca Musarithmica can be found after page 184 in volume 2. 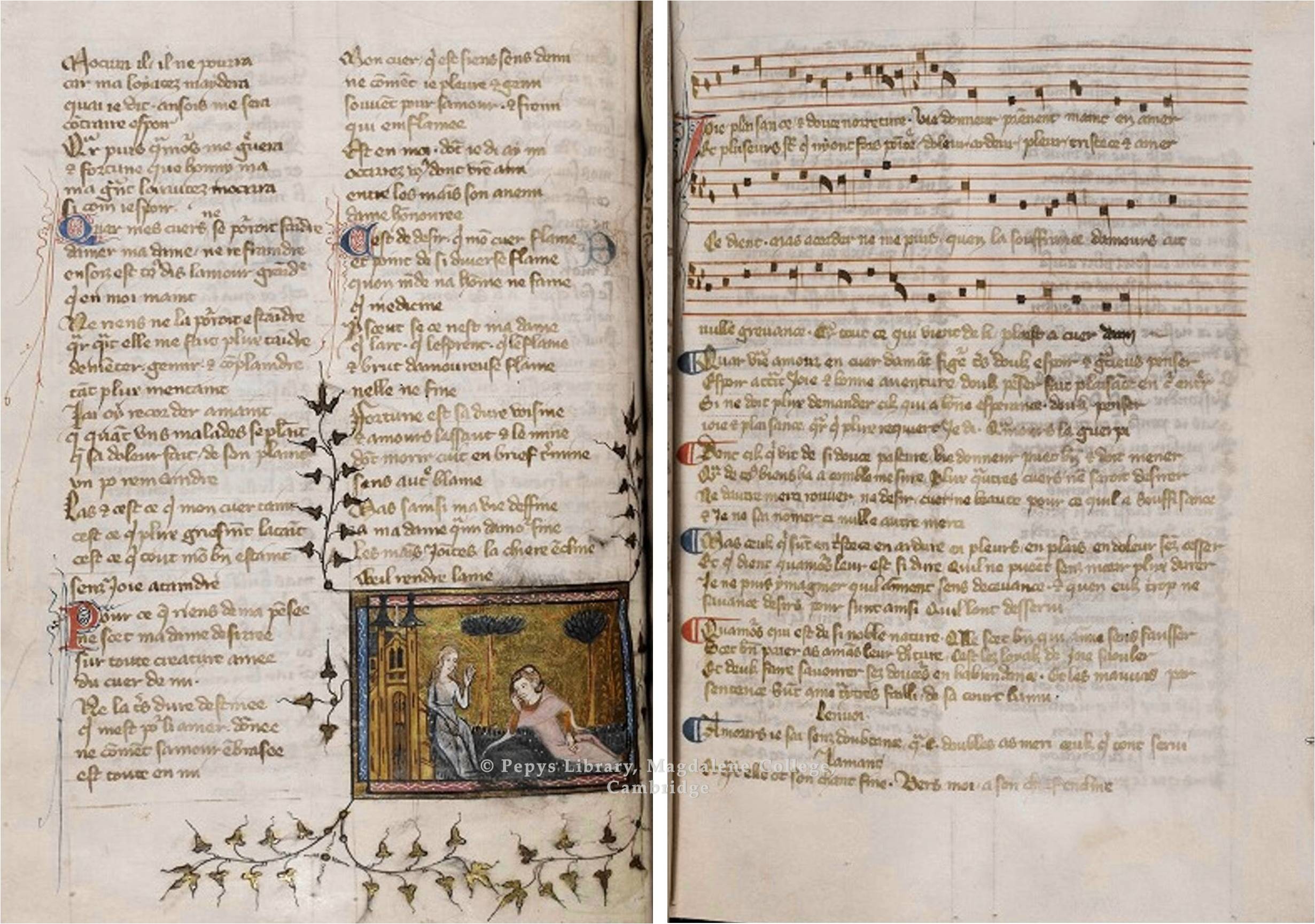 This 15th century French manuscript is one of three medieval manuscripts in the Pepys Library to contain music. Pepys most likely collected such manuscripts as much out of his interest in calligraphy and early handwriting, as out of any desire to make a serious study of their musical content.

This particular manuscript contains the text ‘Remède de Fortune’ (The cure of ill fortune) by the fourteenth-century poet and composer Guillaume de Machaut. It is a dit, or narrative poem, in which Lady Hope advises a downcast lover amid the highs and lows created by Fortune and her wheel. The dit is interspersed with lyric poems set to music.  A charming quotation from the Remède de Fortune betrays Machaut’s philosophy behind true music and poetry: ‘Car qui de sentiment non fait son oeuvre et son chant contrefait’ (‘for whoever does not compose from feeling counterfeits his work and his song’).

Guillaume de Machaut (c.1300-1377) was a statesman, cleric and poet as well as a composer. He served under the patronage of various members of the nobility and it is likely that Bonne of Luxembourg (1315-1349), mother of Charles V of France, was the patron connected to Remède de Fortune. At the end of his life, Machaut was the Canon at Rheims.

Machaut was both conservative and forward-looking: he composed music in earlier medieval music forms, such as the isorhythmic motet, but also was a pioneer in polyphonic settings of secular poetry.

The image on the left depicts an excerpt of ‘Remède de Fortune’ including an attractive illuminated miniature depicting two lovers sitting beside a chapel with two towers.  The image on the right shows the song ‘Joie, plaisence et douce norreture’. The music notation is in the ars nova style, a term used to refer to French and Burgundian music of the 14th century, though as a testimony to Machaut’s influence, the ars nova era concluded with his death in 1377.