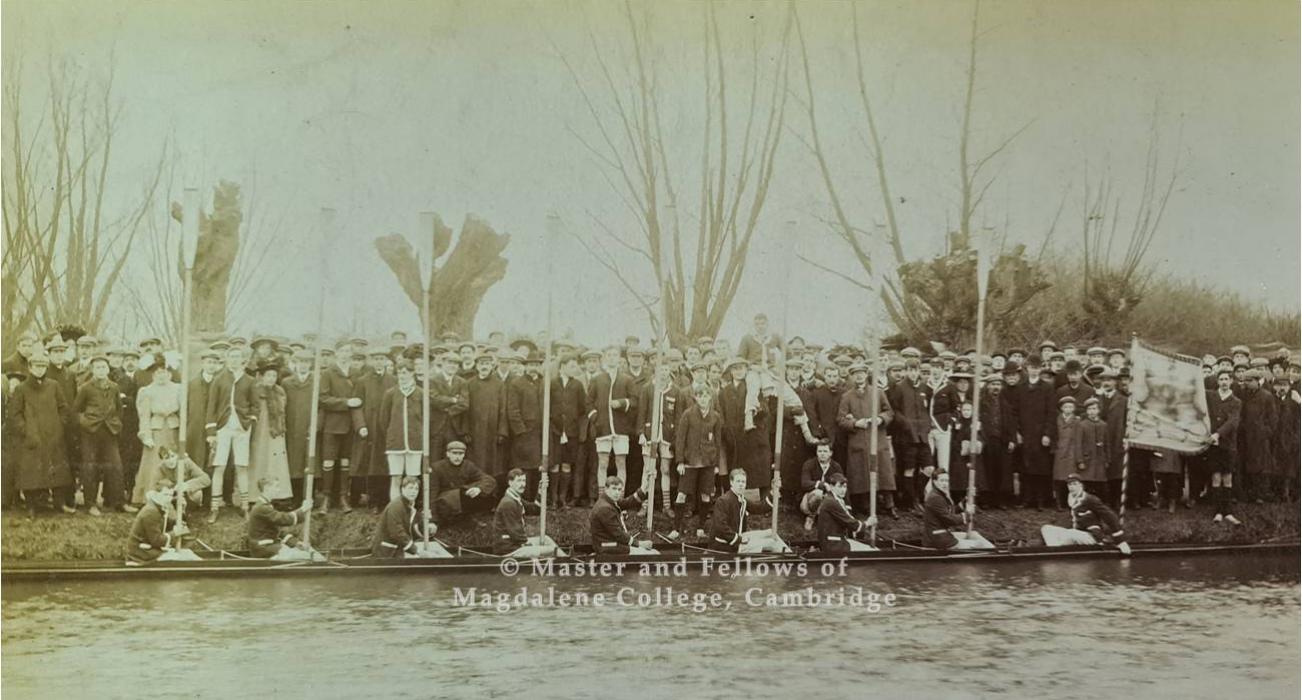 A look at the first hundred years of Magdalene Boat Club.

During the early 19th century, rowing clubs and competitions were becoming more formalised. Leander Club, one of the oldest rowing clubs in the world, was founded in 1818 and is based in Henley on Thames (the famous regatta there beginning in 1839). Cambridge University Boat Club was founded in 1828, as was Magdalene Boat Club (or MBC for short). The first ‘Bumps’ races occurred on the river Cam in 1827, where college crews race to ‘bump’ the boat in front to move up a place in the rankings, with the ultimate accolade of becoming ‘Head of the River’.

The Boat Club’s triumphs and tragedies are recorded in the Secretary’s and Captain’s books. The first Secretary’s book dates from 1835, extremely early for College Boat Club records still extant, and lays the foundations for the traditions adopted and maintained by the club for the following 200 years.

The image above shows the various shields and symbols which were used to show which status each rower had acquired during the term. For example, a Fleur de Lys symbolised membership of the 1st crew, a quill for the secretary and a rudder for the steerer (or cox).

The College’s first boat was called ‘The Tea Kettle’, a reference to the vast quantities of tea consumed at Magdalene College at this time. The second boat was known as the ‘Cannibals’, represented by a shield of three sharp teeth in the image above. The novelist Charles Kingsley rowed for the ‘Cannibals’ shortly after his matriculation in 1838.

MBC achieved early success climbing to 3rd place ‘on the river’ in 1836. In the Secretary’s book seen above, the Club records commissioning a new flag in November 1838, at a cost ‘not exceeding £14’ which in modern money is around £850. The aforementioned ‘Cannibals’ had a skull and crossbones flag, and both are still in the possession of MBC.

When Queen Victoria ascended to the throne in 1837, MBC’s fortunes consistently rose, and three members of the first boat also rowed in the University ‘blue boat’ in 1840. In the Bumps races, MBC briefly rose to second ‘on the river’ in 1840 and 1842 but were unable to maintain this position in either year. It was in 1842 that the first ‘Bumps supper’ was recorded, the traditional dinner after the end of the Bumps racing in Lent and Easter terms.

‘Blades’ or oars, are the cameo histories of any Boat Club. The original blades were narrower, ‘pencil’ blades which were used until the 1960s. This blade from 1879 is the oldest surviving example held by the College. The name just visible on the bottom right of the blade is that of J A Watson Taylor. The history of MBC published in 1930 states that ‘it was long since the Club had enjoyed the services of so successful an oar as J A Watson-Taylor who rowed in the University Blue Boat for four years and filled the offices of Secretary and of the Cambridge University Boat Club in turn.’

Watson-Taylor has the distinction of being the first Magdalene Student to have won the ‘Magdalene Pairs’ Race which was established in 1844, the heyday of MBC rowing, when the Club decided to present a pair of ‘silver challenge’ oars to be competed for by members of the University. It was most recently won by a Magdalene crew in 2019.

The years following Watson-Taylor were disaster years, undoing his good work, and between 1885 and 1892, not a single ‘bump’ was made – a melancholy period. The Watson-Taylor family however, continued to support MBC and his sister, Mrs. Ward, presented a new boat The Rose, which marked a revival in the Clubs fortunes.

Magdalene began the new century with an improved record. Mr Stuart Donaldson, a teacher at Eton and no mean oar himself, was appointed Master of Magdalene and his encouragement of the sport enabled MBC to flourish once again.

Between 1904 and 1919, MBC crews competing in the May Bumps made 17 bumps in total. The Secretary of the club, R F Kindersley, was ‘spare man’ for the Cambridge VIII which rowed at the Olympic Regatta.

Magdalene’s well-known alumnus George Mallory played his part in the Boat Club’s successes between 1906 and 1908, first appearing in the record book in the Lent Term 1906 and progressing to become MBC’s secretary and Captain. His contributions to a successful three years were capped at a finale at Henley Royal Regatta in 1908, where his crew competed for both the Ladies’ Plate and the Thames Cup. He later became famous for his mountaineering exploits, last seen accompanied by Sandy Irving at 28,000 feet, ascending Everest in 1924.

In these images we see Mallory in a formal crew photo (far left), and two images at the Lent Bumps of 1907, where he rowed at ‘seven’ (the person who sits in the seventh seat from the bow of the boat). In the third image, the crew are wearing their blazers the colours of which were confirmed in the Minutes of a meeting in February 1863 as being lavender and indigo. The flag, seen flying behind the Cox, is the same flag illustrated earlier in this exhibition.

In this year when the College boat went up into Division I celebrations got seriously out of hand. Following the Bumps supper the traditional burning of a boat had been forbidden by a College Tutor, but spare panelling from the Chapel stored in an outhouse was burned instead.

Keep an eye out for Part 2 coming soon.