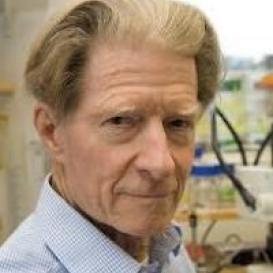 Professor Sir John Gurdon did his undergraduate work in Zoology in the University of Oxford and later held a one-year postdoctoral position at CalTech in the USA.

He returned to Oxford and became a university lecturer in Embryology. In 1971 he moved to the MRC Molecular Biology Laboratory in Cambridge, continuing his work on Amphibian developmental biology.

In 1983 he moved to the University of Cambridge as John Humphrey Plummer Professor of Cell Biology. He co-founded a research Institute of Developmental and Cancer biology with Professor Laskey as co-chairman and was Chairman of this Institute until 2002.

During his career Dr Gurdon concentrated on nuclear transplantation in the frog Xenopus.  He has also carried out a range of experiments with this material, discovering the value of messenger RNA microinjection, mechanisms of response to morphogen gradients, and, most recently, mechanisms of nuclear reprogramming by Xenopus oocytes and eggs.

We are trying to find ways of obtaining embryo cells from the cells of an adult. The eventual aim is to provide replacement cells of all kinds starting from usually obtainable cells of an adult individual. For example, we would like to be able to find a way of obtaining spare heart or brain cells from skin or blood cells. The important point is that the replacement cells need to be from the same individual, to avoid problems of rejection and hence of the need for immunosuppression. We are trying to identify the molecules and mechanisms by which eggs can reverse the process of specialisation, so as to derive embryo cells from adult skin cells.

Foreign Associate, US National Academies of Health and Medicine

Lecturer in Zoology, University of Oxford

Awarded the Nobel Prize for Physiology or Medicine