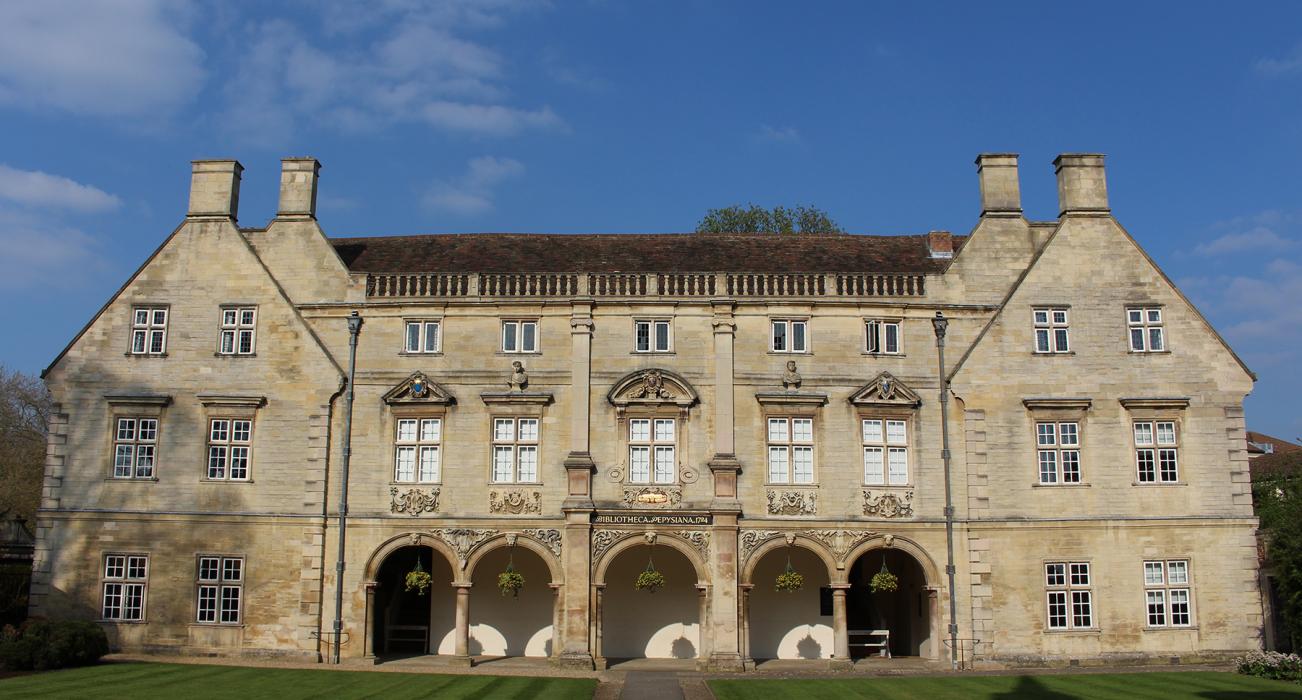 History of the Pepys Building

Samuel Pepys, Secretary to the Admiralty, Member of Parliament, President of the Royal Society, was born in 1633 and died in 1703.

Pepys was a scholar of Magdalene College, and by codicils added to his will directed that his library – the collection of a lifetime – should pass into its possession and be housed in this building after the death of his nephew and heir, John Jackson (1723). The 3000 volumes (mostly bound especially for him) are to stand here, without addition or subtraction, ‘for the benefit of posterity’. They are kept as he left them – arranged ‘according to heighth’ in the book-presses which he had made for him in a naval dockyard. His catalogue, shelf-list and library desk are still in present.

A private library, wrote Pepys, should comprehend ‘in fewest books and least room the greatest diversity of subjects, stiles and languages its owner’s reading will bear’. The contents of his own library in fact reflect a remarkably wide range of interests.  Literature, history, science, music and the fine arts are strongly represented. One of the treasures of the library is the series of diaries Pepys kept from 1660-1669.

Although it is unlikely to have been planned before 1640, the Pepys building was probably not completely finished until after 1700, battling against changes in fashion which overtook it. The original plan was probably a more modest, all-brick building in two wings with only a skeletal link between them. This languished for want of money, but the project was revived after advice was sought from Robert Hooke (architect and founder of modern structural engineering) in 1677. The main new idea was to bring the front forward by several feet, and create a large room or series of rooms over a loggia in the central link. This may have been specifically envisaged for library use: it seems that the books bequeathed by the then Master, Prof. James Duport, at his death in 1679 were kept there until 1834. He had contributed substantially to the cost of the building.

Samuel Pepys made three subscriptions to the building fund, although there is no formal evidence of his intention to bequeath his Library to the College, and of his hope to have it placed in 'the new building', until his will, dated 1703, just before his death. If the plan was changed in this way in the late 1670s, this would explain why there is such a dichotomy between the back and the front of the Pepys Building: the back is like a Jacobean manor house, while the front is neo-classical and in Ketton stone (it is indeed the only part of the College not in brick). It might also explain some of the other abounding anomalies, such as the facts that Second Court is some ten feet short of a square, and that the east end of the northern boundary wall has been re-built at an angle in order to give access to the Garden. It would also make it easier to understand why the internal brickwork in the front of the building is of inferior quality to the rest.

However, it has to be stressed that the exact history of the building is unknown, and it remains full of puzzles. The least of these is the irregular ground-plan: the south wing was deflected northwards because it abutted the College Brew-house, which had been rebuilt as recently as 1629. It is less easy to explain why the dormers are not uniform, or why the south wing is two feet shorter than the north. Much of the carpentry is shoddy. The staircases might well be pleasingly up to standard for the 1670s, but the whole construction in the garrets is surprisingly sketchy for collegiate use. The west front is delightful, but only a moment's considered contemplation is needed to reveal a lopsided rhythm in it, since it is in fact slightly asymmetric: the middle window on the first floor is not central, the distance between the second and third windows is greater than that between their equivalent pair on the other side, and so on.

The frieze inscription 'Bibliotheca Pepysiana 1724' records the date of arrival of the Pepys Library; above it are painted Pepys's arms and his motto Mens cujusque is est quisque (taken from Cicero's De re publica, 'The mind's the man'). To the left and right appear the arms of two College benefactors, though neither contributed to this building: Sir Christopher Wray, to the upper left, and Peter Peckard (quartering Ferrar) to the right, both of which were added much later (1813?). The two busts are pseudo-antique.